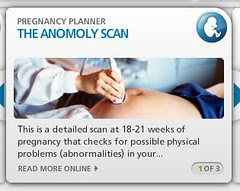 Image by DrJohnBullas via FlickrAccording to the CDC, birth defects affect about one in every 33 babies born in the United States each year. Birth defects are the leading cause of infant deaths, accounting for more than 20% of all infant deaths.  They usually occur during the first three months of pregnancy, making the mother’s diet during and before pregnancy of critical importance to the health of the baby.


It has long been known that folic acid helps prevent neural tube defects and spina bifida.  Folic acid rich foods include Romaine lettuce, asparagus, broccoli, beans and spinach. In recent years, it was thought that if a pregnant woman simply supplemented any diet with folic acid in tablet form, it would provide optimum protection against birth defects.  While folate supplementation is important, women who eat the most amount and variety of vegetables, fruit and whole grains during their childbearing years will be less likely to have a baby with certain birth defects.   Recently, a study from Stanford University School of Medicine showed that healthy diets that included a diet rich in fruits and veggies decreased the likelihood of cleft lip or palate.  More info here.

The March of Dimes website lists animal protein to include meats, poultry and fish, on their list of food-borne risks in pregnancy.  This is because of the risk of bacteria such as listeriosis, E. coli and Campylobacter infections, and salmonellosis.  A particularly dangerous bacteria that can be found in raw or undercooked meat, Toxoplasmosis, is a parasitic infection.  Although it often causes no symptoms or only mild flu-like symptoms, if a pregnant woman contracts it, there’s about a 50% chance she will pass it on to her unborn baby . This may cause vision and/or hearing loss, mental retardation, seizures and other problems.

Pregnant women should also stay away from fish because of mercury contamination.  High levels of mercury can harm a baby's developing nervous system.  Researchers are also studying the connection between a pregnant woman's exposure to mercury and their children having autism.  Fish that live the longest and are predatory to other fish tend to have the largest accumulations of mercury, but almost all fish are contaminated with some level of mercury.