Recent literature has shown that diet can improve the symptoms of painful and inflamed joints suffered by millions of arthritis patients.  Certain foods such as meat and dairy may trigger arthritic symptoms, and a meat-free diet can give relief to arthritis sufferers.

Osteoarthritis: This is the most prevalent form of arthritis, caused by wear and tear of the joints.  Most sufferers of this type of arthritis are in the >50 age group.  However, this condition is rare in Asian and African countries whose populations follow a plant-based diet and few animal products.

Rheumatoid Arthritis: Thought to be an autoimmune disease, this is a more aggressive type of arthritis caused by damage to the synovium that lines the joints, resulting in pain and inflammation. A study published in the Am. Journal for Clinical Nutrition showed patients in vegetarian diet groups improved significantly compared to patients who followed their usual omnivorous diet throughout the study period.  (More info here.)

Gouty Arthritis: Gout is caused by a build-up of uric acid in the joints.  It is triggered by a diet high in purines to include meat and fish.  The purines in vegetables, however, do not increase gout symptoms.

Inflammatory Polyarthritis:   This type of arthritis occurs when there is inflammation in more than four joints, and is often a precursor to rheumatoid arthritis.   A 2004 study found that “subjects with the highest level of consumption of red meat, meat and meat products combined were at an increased risk for inflammatory polyarthritis.” See abstract here.

Meat is a choking hazard. 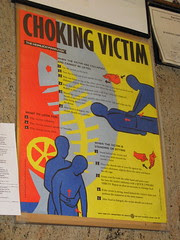 Maureen Oleskiewicz, a 28-year-old teacher , recently choked to death on a hot dog at Wrigley Field.  Meat products, especially hot dogs, are a common choking hazard.  Healthy adults are just as likely to choke on hot dogs or other meat products as young children or seniors.

It is not unusual to see an ambulance parked in front of a steakhouse to help a diner who is choking on a large chunk of meat. In fact, they have coined the term “café coronary” to describe these choking incidents.  The symptoms are similar to a heart attack when in fact the diner is actually choking to death, usually on meat or fish.  Choking incidents in steakhouses are so common, that until recently some states made it mandatory for restaurants to display posters with instructions on what to do when someone chokes.

In the U.S., close to 3800 people die every year from choking as reported by the American Heart Association.  Choking usually occurs during eating and the most common specified food objects that victims choked on were meat products. In fact, meat accounts for 35% of choking incidents.  According to the Journal of Forensic Science, death from choking is the fourth most common cause of unintentional-injury mortality.


Children are especially prone to airway obstruction. Choking on food causes the death of approximately 1 child every 5 days in the United States. Hot dogs are the most common food choking hazard for children. Hot dogs accounted for the largest percentage of food-related asphyxiations among children younger than 10 years of age in a 41-state study published in JAMA (Harris et al.).  Children who choke on hot dogs are 2 to 3 times more likely to be hospitalized than children who choke on candy or other food items.

Most of the medical literature on airway obstruction is related to children, however, people of all ages are susceptible to choking incidents. A study in the UK showed that the 45 to 55 age group nearly doubled the choking emergencies of other age groups. In the UK, the most common cause of choking was fish, followed by meat and poultry.

Posted by pjkrause at 7:39 PM 1 comments

If you eat meat, you have a higher chance of eventually developing cataracts.  Cataracts affect about 60% of people over the age of 60. Cataract surgeries are performed over 1.5 million times each year in the United States alone.

Cataracts are thought to be a normal sign of aging, but now scientists believe that diet can largely prevent this common eye disorder.    Cataract symptoms are a gradual clouding of the lens, causing impaired vision. 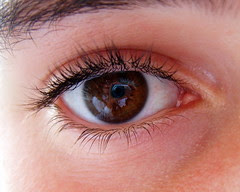 It has long been known that eye health is linked to the consumption of fruits and vegetables.  Many nutrients found in a vegetarian diet have been shown to ward off cataract development.  The most important are:

Vitamin E. This powerful antioxidant is a preventative of cataracts and macular degenerative disease. Some of the best sources are wheat germ oil, sunflower seeds, hazelnuts, almonds, wheat germ, papaya, and peanut butter.

Posted by pjkrause at 1:07 PM 0 comments

Vegetarian diets save on grocery, energy and medical bills.

A good way to save money at the grocery store is to replace meat products with fruits and vegetables. Eliminating meat reduces the average grocery bill by about a third.  For the cost of a single steak, one could have a vegetarian feast for a family of four.

Comparing the cost of animal protein to vegetable protein, the savings are significant.  In the U.S., relatively inexpensive beef, such as ground round, averages approximately $3 per pound, boneless chicken breasts cost $3.40 a pound, and canned tuna is about $2 per pound.  Vegetarian protein such as dried beans and lentils costs less than $1 per pound, and rice, the vegetarian staple, can be found for sixty to seventy cents per pound.

Consumers would also be surprised to know how much of their monthly electric bill and/or gas bill is used to refrigerate and cook meat.  Meat has to be cooked in order to be safe and palatable. Fruits and vegetables for the most part can be eaten raw, but when they are used in baked recipes, they take a fraction of cooking time compared to meat.

In many homes, refrigerators are the greatest user of electricity. The average family could use a substantially smaller regrigerator/freezer if they did not need it for meat products.  Over 80% of the space in a typical refrigerator is used for meat and dairy products. Although some fruits and vegetables have a longer shelf life when refrigerated, many veggies/fruits will keep for several days, if not weeks, without refrigeration. On the other hand, it is mandatory to refrigerate or freeze meat and dairy from the time it comes home from the market until it is cooked—a large drain on the monthly electric bills.  If there happens to be a power outage for more than a day, all the meat and dairy products in the refrigerator and/or freezer will probably spoil—at a potential cost of several hundred dollars.

The major cost savings of a vegetarian diet, however, is in the long term health benefits. Switching to a healthy vegetarian diet will potentially save you thousands of dollars in future medical costs to include prescriptions, medical treatment, insurance and loss of income.

Lastly, tax dollars in the U.S. are being diverted to support the meat industry. Although you can get a fast food hamburger for only a dollar, tax payer dollars contribute billions to the meat and dairy industries annually.  Tax money that comes out of your paycheck is used to support the meat/dairy industries by subsidizing feed grain, water, insurance, grazing land, and environmental clean-up for the benefit of a handful of corporations that control the nation's meat supply.